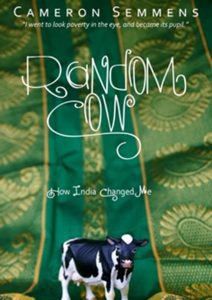 Cameron Semmens travelled to India with World Vision to see the work they are doing with the most disadvantaged, and he experienced first hand the sights, sounds, smells of India – and importantly allowed himself to touch and be touched by its people.

An award winning poet and performer, Cameron has been able to communicate in rich detail his experience of India in his book Random Cow: how India changed me.  I read it on a flight from Adelaide to Melbourne, but it did more than just fill the gap between airports. (And in fact it demanded multiple reads.)  As with most of Cameron’s work, it made me stop –  and think about things I hadn’t thought of before, feel things I hadn’t felt before.  He has a gift that enables him to tell you about his thoughts and experiences in a way that dares you to see things from a different perspective.

This Journey Starts with Weird Words, touches on the things we can inoculate against, and those we can’t and Random Cow – also available on Youtube – sets up the reader’s experience by bringing to the forefront the contrasts of life in India where ‘man and beast still work and live together in modern/ancient ways, in modern/ancient streets’.

When Cameron watches the boy and the bubbles, or has an interchange with the begging woman and her baby, or a conversation with the Tamil shopkeeper (they don’t speak a word of the other’s language) we are there.  We look through his eyes into the eyes of the man in the slum who holds our gaze longer than is comfortable, and we wonder which side we would take in the debate over ‘to give or not to give’ when surrounded by such need.  Our heart is torn by stories of boys in the dirt sewing saris and polishing precious stones, and we are lifted by prayers on the wing, dazzled by grace and amused by insights of self discovery that Cameron shares along the way.

The Hidden Cost of Extra Baggage tells us that Cameron probably will never fully unpack all that he has brought back from India.

Go to webcameron.com to view Cameron performing selected pieces from Random Cow.  I recommend you take a look and then buy the book (which is available in book, e-book or soundtrack).