RiseVibes: Graeme Clark: the Man Who Invented the Bionic Ear by Mark Worthing 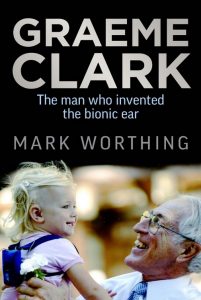 The ‘bionic ear’ is an amazing invention that has given many people hope and new life through the gift of hearing.  This biography tells the story of the man behind the invention – an otherwise ordinary and very humble man who pioneered a medical ‘miracle’ that we now almost take for granted.

The son of a pharmacist/optometrist father and musician/artist mother Graeme was full of energy and always on the go as a child.  He inherited his parents’ generous and charitable attitude towards others.  He had an adventurous spirit and, when he decided to do something, he committed to it thoroughly and wholeheartedly. These traits saw him accomplish what others thought impossible.

By aged 9 he was conducting experiments in a makeshift laboratory in his mother’s laundry. By 10 he had already determined that he wanted to be an ear and eye doctor. This decision was strongly influenced by his father becoming profoundly deaf.

The book documents Graeme’s study, research and career progression and the way he took advantage of every opportunity to become the best he could be – whether it was through failure (which was rare) or jobs that were not his first choice but turned out to be a useful training ground.  It tells the story of what shaped him, from his birth in Camden, NSW through his schooling and sporting experiences, falling in love, his studies in the UK and unexpected adventure on the way back to Australia.

At 34 Graeme became Australia’s youngest professor of medicine. His dedication to his dream meant he and his family made many sacrifices, including at one stage driving a car that was held together by rope! He faced great opposition and funding bodies were often unwilling to take a chance on him.

This book explores why Graeme succeeded where others failed. It describes his family life and relationships, his method and motivation, and touches on how scientific knowledge helped to reinforce his faith. It explains how, in his research, he had to master fields such as “neuroscience, speech science, surgery, medicine, audiology, acoustics, engineering, biological engineering”.

This is a fascinating account of how Graeme Clark’s dream as a young boy was realised through dedication, faith and perseverance, bringing Australia to the forefront of bionics research.  While he continues to work and to receive many awards and accolades his greatest reward, says Graeme, are the stories of the people whose lives were changed for the better thanks to the bionic ear.

‘Graeme Clark: the man who invented the bionic ear ‘ is published by Allen & Unwin. It is available in paperback by emailing Tabor Adelaide at enquiry@adelaide.tabor.edu.au or from Koorong (online and instore).