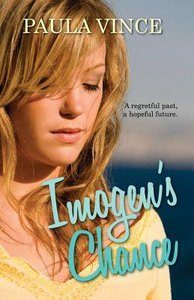 This is an engaging novel about Imogen Browne, a young woman who travels back to Australia from the US after a prolonged absence to face – and hopefully help restore – circumstances and relationships that were impacted by an unfortunate accident many years before. As the story unfolds, we discover another incident has occurred and it appears Imogen is the only one who knows the truth. Carrying significant guilt she promises God she will do anything to right the wrong she feels responsible for.

Invited back into the Dorazio home 15 years after she last stayed with them Imogen realises she has landed in the midst of yet another family crisis and wonders whether her timing could be worse.

When Asher, who is the same age as Imogen, reveals his battle with cancer she feels ill equipped to help him. Asher comes to appreciate Imogen’s impartial view of his situation and she finds herself drawing closer to him as he relies on her support.  The author describes with great sensitivity how Asher deals with surgery, chemotherapy and the battles of the heart and mind that he experiences along the way.

There is a chance meeting with a man who had leukaemia but claims God has healed him.  Asher is sceptical, but curious.  He and Imogen begin to question, to research and to slowly hope that perhaps healing is possible. Having talked all his life about trusting God, Asher’s cancer diagnosis challenges him to really put this trust to the test.  Should he accept the diagnosis of terminal illness or did God intend something different? And why is it that God will heal one person but not another?

Interwoven with the story of Aunt Marian’s accident and Asher’s battle with cancer is the mystery of the circumstances surrounding Uncle Haydn’s untimely death five years before.

This book is a reminder that God still has something to say to us today through his Word.  It explains that God is at work, but not always in ways we want or expect him to be.

The story is well written and beautifully descriptive. There is an unexpected twist towards the end and a level of suspense as we wait to see how things will work out for each of the characters.

‘Imogen’s Chance’ is published by Even Before Publishing. It is available in paperback from Koorong (online and instore).