Freedom or honour.  Which would you choose? 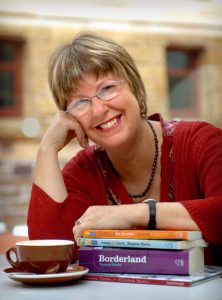 Rosanne Hawke teaches Creative Writing at Tabor Adelaide, an accredited tertiary institution with a Christian perspective.  She talks about her novel, Marrying Ameera.

Seventeen year old Ameera Hassan has just finished school and her friendship with Tariq, her best friend’s older brother, is growing.  But when her Pakistani father hears of it, he sends Ameera to stay with his family in Azad Kashmir to attend her cousin Jamila’s wedding.  It takes her less than a week to realise the devastating truth – the intended marriage is not Jamila’s but her own!  Ameera has a tough decision to make: will she choose freedom or honour?

Marrying Ameera is a novel for young adults by Rosanne Hawke which explores forbidden love between cultures.    The idea for the novel came about while Rosanne was in Pakistan on an Asialink Literature Fellowship.  She heard about a man in the British embassy who directed the Forced Marriage Unit in Islamabad where they rescue 130 British-Pakistani brides or grooms each year.  It happens in our country too.  Recently a Lebanese-Australian girl rang the Australian Federal Police for help because she was being sent overseas to marry without her consent. 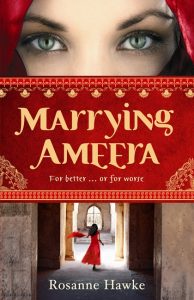 Rosanne says “For me, writing is a way of talking, a way of interacting with the world and making sense of what I hear and see.  Sooner or later what I experience becomes assimilated into my work, and although that happened with what I saw in Pakistan, Marrying Ameera is a work of fiction.  Arranged marriages work very well for three quarters of the world, but forced marriages are against the law here and in Pakistan.”

Rosanne lived in Pakistan for seven years, and in the United Arab Emirates for over two years, visiting a few other places in between.  During that time she worked as acting principal of a girls’ boarding school – an Urdu medium school – which she describes as a challenge.  But she says the most fun she had in Pakistan was as a house parent in an international boarding school.  It was in Pakistan that Rosanne began to write.

“I couldn’t find enough things for my kids to read”, she says “so I used to tell them lots of stories.  One night when my eldest daughter was home from boarding school I told her a story and she asked me to write it down for her birthday.  When her birthday came she wanted me to type it up for Christmas.”

Although Rosanne’s books are published mainstream, her Christian worldview permeates her body of work.  She says “I believe a beautiful book will tell the truth and give hope to the hearts of young readers.”

She has a passion to see students improve their writing skills and believes the arts are important in sharing stories with others so we can gain an understanding of people who may have different cultures from our own.

“God is an artist; creativity and language are a reflection of His image.  I would like to see churches embrace the arts and nurture artists in their congregations, for the arts shape culture.”

Rosanne Hawke is a multi-award winning Australian author.  She has written sixteen books for young people, among them Mustara, which was shortlisted in the New South Wales Premier’s Literary Awards in 2007, and Soraya the Storyteller, which was shortlisted in the Children’s Book Council of Australia Awards in 2005 and the South Australian Festival Awards in 2006.  Rosanne was awarded an Asialink Fellowship to write in Pakistan in 2006 and a Carclew Fellowship in 2008.  She has been an aid worker with TEAM in Pakistan and the United Arab Emirates.  She received a Tabor Adelaide Award for Teaching Excellence.

Find out more about Rosanne and her books at www.rosannehawke.com