Home » RiseVibes: From Head to Toe: Men and Their Roles in the First Two Generations of Christianity by Ross Saunders

RiseVibes: From Head to Toe: Men and Their Roles in the First Two Generations of Christianity by Ross Saunders 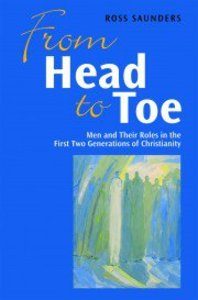 The book shows how Jesus turned the natural roles and rights of a Mediterranean male upside down. Whereas women moved upwards in importance and function in early Christianity, men moved downwards, hence the title: From Head to Toe.

Christian men will find this book helpful for discovering Jesus’ perspective on their roles as men, especially leadership.  Both men and women involved in formal leadership, whether in the church or elsewhere, will also find it useful. I personally found it invaluable when completing an assignment on how Jesus’ teaching was counter-cultural. And for the novel I am working on, it has given me valuable insight into the mindset of the men of those times.

The massive differences between current Australian culture and that of Jesus’ time are fascinating. The book discusses the importance of honour and shame – probably the most important values of the day, as well as values of identity, limited supply and the acceptance of deception of ‘outsiders’.

For example, it was expected that the eldest son would continue in his father’s trade. If he chose otherwise, as Jesus and some of his disciples did, he brought shame on the family. Everyone’s identity was about ‘being a member of a family, a community and a village.’ Compared to our emphasis on individual rights and achievement, ‘a personal identity separate from anyone else was impossible and unthinkable.’

‘Trying to acquire more land or sheep or friends or honourable mentions than was appropriate to your status would have been interpreted as trying to push in ahead of someone else… and you would be… dishonoured’. ‘When Jesus proclaimed that the love of God was … available to all who ask for it, he was going against the perception that everything was in limited supply.’

After a general discussion of first century Mediterranean values the book profiles twenty nine individual men of the New Testament. For each man we learn of his personal challenges in living out Jesus’ radical teaching. It certainly gave me more empathy and understanding for just how much these men sacrificed to follow Jesus.

The final chapters cover Jesus’ teaching on leadership, especially the leader-as-slave model. It finishes with the author commenting that ‘these ideals, as espoused by Jesus…were to last but one more generation before being overtaken by natural human condition’ where leadership reverted to domination rather than service. He concludes with a hope that the churches of today might reinstate Jesus Christ ‘as head of the household of God’.

The book is well laid out, well researched and easy to read. I would certainly recommend it to others.

‘From Head to Toe’ is published by Acorn Press and can be purchased at acornpress.net.au. Also available in eBook format.