Home » RiseVibes: John Wesley:  The man, his mission and his message by David Malcolm Bennett

RiseVibes: John Wesley:  The man, his mission and his message by David Malcolm Bennett 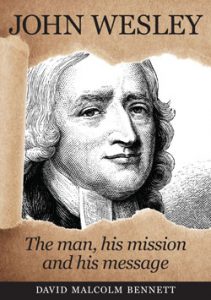 As the story of John Wesley unfolds the beginning of Methodist teaching is revealed, with its foundational doctrine of salvation by grace, personal relationship with God, discipline in learning and understanding the scriptures, social justice, prayer and honest living.  Wesley was ordained a Minister of the Church of England in 1728 but it was some time after he commenced preaching that he was overcome with the realisation of the saving grace of God. This was the start of fifty years of travelling and evangelising throughout Great Britain – he and his brother Charles, also an ordained Anglican minister and writer of many popular hymns, even travelled to the US for a time.  To many, the message he brought was completely new, sometimes a shock, and often met with violent opposition.

Wesley travelled by horseback until well into his seventies, and at times reportedly spoke to crowds numbering in the tens of thousands.  Angry mobs often tried to disrupt him but Wesley’s quiet confidence in God’s ability to deliver him from harm diffused situations that could have been dangerous.

This book does not project Wesley as some kind of holy man, but shows him as a fallible human being. There was not much that stood in the way of Wesley’s preaching – not illness, marriage, mobs or accidents. He once even preached on his knees when he had a broken ankle.

Wesley lobbied strongly against slavery, writing that ‘slave holding’ is never consistent ‘with any degree of social justice’ and is ‘utterly inconsistent with mercy’. In 1791, just a few days before he died aged 86, Wesley wrote a letter to William Wilberforce encouraging him to continue his fight against slavery and not to ‘weary in doing well’.

Extracts from some of Wesley’s sermons are interwoven with the narrative and give a real insight into the heart of the man and his passion for reaching as many as possible with the message of salvation.

This is a really interesting and inspiring story of a man who has long been admired for the impact he had on so many. His influence extended beyond Methodism, with his legacy a key part of the history of Christian mission and evangelism throughout the world.

‘John Wesley: The man, his mission and his message’ is published by Rhiza Press. It is available in paperback from Koorong (online and instore).