How does a place of slaughter become a sacred place?

Home » Featured Articles » How does a place of slaughter become a sacred place?

On 29 April 2015 two young Australians walked the final few steps from their jail cells to stand before their executioners.  Singing praises to God, their hearts and minds were focused on the cross of Christ.

Nine years earlier, in February 2006, these young men were convicted of drug smuggling in Indonesia and sentenced to death by firing squad. While there were those who felt they deserved their fate, it was clear there were many more who hoped and prayed for a reprieve.

Why did their execution matter to so many?

Myuran Sukumaran and Andrew Chan went into prison drug smugglers, key figures in the group dubbed ‘the Bali 9’, and left prison changed men. During the nine years they spent in custody they were rehabilitated and, determined to make a difference to the lives of those incarcerated with them, they focused their energies on helping others. Myuran became an accomplished artist, while Andrew became an ordained minister, establishing a church inside the prison. Amongst their other activities they mentored fellow prisoners and helped to teach them English.

As we followed their story we wanted so much to believe there was hope – that their efforts to turn their lives around, and their positive influence within the prison, would be acknowledged.  That somehow mercy would triumph. When that failed to happen we watched events unfold from afar, unable to understand why, and we wept. We wept for Myu and Andrew, for their families, for what we saw as a lack of justice. But mostly we wept for loss of hope.

Rev Christie Buckingham was Myuran’s spiritual advisor. She met Andrew and Myuran during a missions trip to Indonesia in February 2012, when a friend who was ministering in Kerobokan Prison invited her to visit.

Her eyewitness account of 29 April 2015 is portrayed in a short film called ‘Execution Island’.  I was privileged to view the film before its release and found it extremely moving, as if I had been allowed entry into a very personal and intimate place, and I was honoured to have been given access. I had the opportunity to speak with Christie about her experience as Myu’s spiritual adviser, and about the film which was released on 28 April.

Like many of us, I followed Myu and Andrew’s story closely and I couldn’t help wondering how Christie was able to remain strong and keep herself together while she supported Myu, knowing he was going to be executed.

“The main thing for me”, Christie said, “was that I didn’t actually think about myself. It was not about me, it was very much about Myu. My entire disposition was entirely about what did he need? How could I attend him as Christ would attend him? I remember being in that space of thinking I was being closeted by God, God being all around me and protecting me.”

Walking into such an horrendous situation, Christie was not totally sure what she would encounter on Nusakambangan Island where the execution was to take place. But it was as if she too had prepared herself in the event that, like Myu and Andrew, she didn’t return.

“On the way to the island one of the lawyers said to me, ‘make sure the boys get what they need’. I said the boys will get what they need and if I don’t come back for any reason, tell my family I love them and I’ll see them on the other side.”

Christie shares that, from the very human side of it, Myu wanted to die with the same values he lived with: courage, kindness, faith. She was acutely aware that she was going to be the last kind word, the last human touch that he would experience.

It is clear that Christie does not want Myu and Andrew’s story to be forgotten. She was also involved in the making of the 2017 movie ‘Guilty’, focussing on Myuran’s final days. So why did she also choose to be involved with the making of ‘Execution Island’?

“It was really the tenacity of the film makers. I had represented myself in ‘Guilty’ which took a lot out of me. I asked them ‘what is the difference, why do this?’ Their response was ‘You made a promise to Myu that you would speak out against the death penalty. We believe we can come from an angle of faith, to look at the death penalty from a Christian perspective.’

“This film comes from a completely different angle – the complete senselessness of the death penalty, but also the question: Could I be that full of grace facing my end? Could my last words be ‘Jesus I trust in you’? From a deeply personal perspective I have actually prayed that – that those would be my last words. God told me that I had better start practicing now. ‘Jesus I trust in you, no matter what I face’.”

Christie emphasizes that she was only one of many involved in Myu’s transformation. But as his spiritual adviser she had the special privilege of staying with him right up until his last moments. She was determined to be there throughout, to fulfil the promise she made to support him through his ordeal. “Why say yes and not carry it through? You don’t walk alongside someone then leave them when they still need you!”

Christie made a vow to Myu that she would continue to speak out against the death penalty, and she now campaigns alongside other organisations such as Reprieve and Amnesty to see a global moratorium on the death penalty.

Christie Buckingham agreed to be involved in the making of ‘Execution Island’ to honour a promise to Myuran that his story would not be forgotten. Image shows a scene from the film.

“If you don’t accept people can change … No one has an incentive to change.”[ii]

“Myu was a real challenge to people, particularly if you don’t believe in second chances.”

She has heard people say ‘if you’ve done the crime, do the time.  “But”, says Christie “do the time… time which allows them to rehabilitate…not the death penalty. People of faith, if you think the death penalty is okay look at your theology. People need to look at their faith. Is there anything too much for God to forgive? Can people be redeemed?”

Christie strongly believes that it is important to keep the conversation going. “People have paid for this with their lives.”

The key themes of the film are that no-one is beyond redemption. No place cannot be made sacred by the presence of God coming and intervening in someone’s life. And there is a need to forgive people when they’re truly repentant.

Of her experience walking with Myu, Christie says: “This has been the most radical, confronting experience in my faith journey. I have seen the love of God and experienced his presence in a way I have never before or I may never again, this side of eternity. I witnessed braveness in the face of barbaric behaviour, holiness in a place of hate, and gentleness and meekness in an environment of force and confusion. I saw the power of good and the power of God face head on the forces of evil, the mechanics of a merciless judicial system. I witnessed a dynamic that I can only describe as testament to God’s amazing grace.” 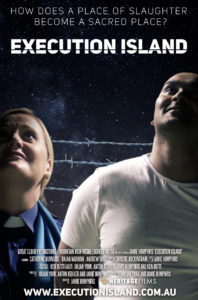 Churches and community groups are encouraged to screen ‘Execution Island’ and to utilise the resources, including study guides, which are available to explore the themes of redemption and forgiveness.

HOW THE FILM CAME ABOUT

Executive Producer Julian York got the idea for the film after reading an article about Christie Buckingham,  where she detailed intimate moments in her counselling of Myuran, both through his execution and his preparation for it. “[The article] came to me at a time when I was really struggling with life, and testing my faith…Their story, and how they were singing worship songs to their cross was a real perspective changer for me. I really had a distinct sense that we should tell this story.” He emailed co- producer Anton Bekker and “as God ordained it,” Anton knew Christie’s husband Rob Buckingham.

But they struggled financially to get the film off the ground and they experienced a number of roadblocks along the way. Two weeks out from production they still didn’t have a cast.

Julian says, “The fact that this film was made is a miracle and a testament to God’s provision.”  That provision meant that much needed funds were raised at the last minute and they found the right people to portray the three principal characters within days of commencing shooting. The crew also donated their time, and people donated gear and boats.

A scene from the important short film ‘Execution Island’.

A FEW WORDS FROM THE KEY PLAYERS

Jamie Humphries, producer and director: “This is a film about actual events that happened, a very intimate moment…for me the biggest and most important part of this film was trying to bring it across in an authentic manner.”

“It’s about redemption…can something that was thrown out and cast aside come back and be something valuable again? I would say, resoundingly, yes.”

“I do believe the death penalty’s wrong, but [the film] is a lot more than that. It’s about a broken human being becoming whole, and that’s beautiful.”

Anton Bekker, producer: “I think the greatest challenge for us in making the film was getting people to believe that the story was worth telling.”

“There’s a need to forgive people when they are truly repentant, and show their absolute genuine change of heart as these two young men did.”

Rajan Narayan, actor who played Myuran :“I wanted to be involved [in the film] because in some way I felt involved with the real Myuran Sukumaran. My past before becoming a Christian was peppered with very similar decisions to his and while our stories diverged quite a lot, I think we ended up in the same place, declaring hope in something greater than this world has to offer.”

“There is hope in redemption, people can change.”

Cathy Burnside, actor who played Christie: “These boys were labelled drug dealers and drug smugglers, but they were more than that. These boys have been reformed…yet they are going to their death.”

“There was a silence on set that was like a peacefulness, almost like the boys were with us in that moment and wanted us to tell the story the way it needed to be told.”

Andrew Yang, actor who played Andrew: “I remember just walking to the prison and just being in that mindset that, wow, this is going to happen and what if I was going to be on death row and what would I do. I just pray that I’d have that some grace that Andrew had. He had a great sense of peace.”

“Philippians 1:21 says ‘to live is Christ and to die is gain’. That really set the tone for me and helped me to challenge myself and my own life and my own faith.”