God cares for the animals

My son and I have recently moved back to our old street in inner-city West Footscray, Melbourne.  We had moved out to Werribee for four years to be nearer to my son’s school but we missed what, we eventually realised, was home.  In our first year in Werribee, we had acquired a 7 kg, 8-year-old ginger cat called Catsman.  My son had been yearning for a cat for years and I reluctantly caved in and bought him one, but what happened next took me by surprise.  With his affectionate nature, handsome face and kittenish meow (so at odds with his rotundity) Catsman inveigled his way into my heart.

West Footscray is a lot more “built up” than suburban Werribee, so Catsman’s tranquil previous existence, in which he rarely ventured out of the boundaries of our yard, has been shattered.  I have been accompanying him on his explorations of his new street.  A fortnight ago, Catsman and I went for a walk across the road and I became distracted from my supervisory role by a cute Staffordshire Cross.  When I turned around to look for Catsman, he’d disappeared.  My son and I searched the streets for him until midnight with no success.

We went to bed holding scant hope of seeing Catsman again, as we despaired of him being able to find his way back to his relatively new home. However, he turned up at 7.00 am absolutely exhausted, with a scratched face, his right eye rolling into the back of his head and a blinking left eye.  I let him sleep and then we took him to the vet who put some dye into his blinking eye to ascertain the damage.  It revealed that his eye had been scratched and he was given antibiotic drops for me to administer twice a day.  There wasn’t anything the vet could do about the eye rolling into the back of his head.  Hopefully time would heal.  We returned home and I nursed Catsman.

A week later, Catsman began pulling fur from his chest and I noticed blood.  He went outside for about five minutes and when he returned there was a HOLE in his chest where you could see his insides.  I was aghast! How did that happen?  It looked dreadful and I imagined the worst. I took him back to the vet and she explained that Catsman had developed an abscess from a scratch (which he had most likely sustained during the previous week’s fight) and that some of the flesh on his chest had become necrotic so that when he pulled out his fur, his flesh came with it.  The vet strongly recommended an operation.  A $600.00 operation!  That was on top of the $85.00 from the week before and the $160.00 for that day’s visit. There would, of course, be further costs when he had his stitches removed and future check-ups.  She estimated the time of recovery from an operation to be two weeks.

I asked if there was any alternative.  She informed me that Plan B would be a course of antibiotics, an anti-inflammatory and that I would need to squirt saline solution with a syringe onto his wound twice a day.  He would also need to continue with the eye drops and wear a cone.  I asked her what the estimated time of recovery would be if we went with Plan B and she predicted three to four weeks.  The money was definitely a factor in my decision to choose Plan B but I was also worried about Catsman going through the stress of an operation at almost 12 years of age.  After careful consideration, I chose Plan B. 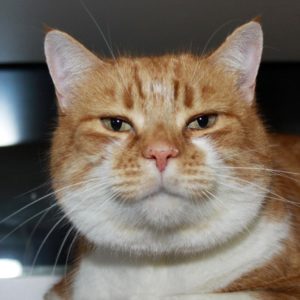 “Catsman’s healing is a real answer to prayer”

Catsman and I returned home with a bag full of medication.  I was wired with anxiety.  I prayed for Catsman to be healed but his wound was so severe that I couldn’t see how my prayer could possibly be answered.  I called Lorna, a woman of God, who I knew had prayed for her dog who had had a cancer on his nose.  The cancer miraculously disappeared and her dog, who had been given only a few months, lived another seven years!  Lorna happily prayed for Catsman but even after her amazing testimony and prayers I was still very anxious and dropped all my pride to put out a prayer request for Catsman on Facebook.  I even sat Catsman on my bed and fervently declared over him that, “By Jesus’ stripes you are healed” (Isaiah 53:5).  I also declared over him that his healing would be appropriated in two weeks’ time – on the day the vet said he would have been healed if we went with Plan A.

Although I perceive myself to be a bit flighty I was determined to make sure I administered his medications at the prescribed times.   In truth, I pretended not to be an “artsy”, imaginative singer/songwriter for a week or so but a brave and reliable nurse.  I thought the role play factor might keep me on track when I felt squeamish about syringes or despairing of how I was going to get antibiotics into Catsman.  “Artsy” and imaginative can be very helpful sometimes…

Eight days into Catsman’s recovery the hole had completely closed up and the surface wound, although quite deep, was healing.  Any anxiety I had regarding his life being at risk disappeared.  Catsman was as schmoozy as ever and wanted to go for walks again.  He had four more days of antibiotics left. I felt relieved that Catsman didn’t go through the stress of an operation.  In fact, he was healing so well that I even cancelled the appointment at the vet and rescheduled it for next week when Catsman would have finished his antibiotics.  I believe that the vet’s prognosis was accurate but God was healing Catsman faster than expected.

Fifteen days after we first discovered the hole in Catsman’s chest, I took him back to the Veterinary Clinic.  The vet was most impressed by how well Catsman had healed.  She tested his eye again by putting some dye in it but it had also healed and there was no need for more antibiotic drops.  Apart from the bald patch on Catsman’s chest, where the wound was, he was totally healed, just as if we’d gone with Plan A.  His healing was approximately 1-2 weeks fewer than the vet’s initial prognosis and my heart is full of gratitude for what the Lord has done.

Catsman’s healing is a real answer to prayer.  I am annoyed at myself for doubting God but, I guess, He asks us to have only the faith of a mustard seed.  I remember thinking how much God cares for animals when I read about the way Jacob responded to Esau after they had reconciled and were to travel together to Seir.  Esau told Jacob to follow him directly but Jacob replied, “You can see, my lord, that some of the children are very young, and the flocks and herds have their young, too.  If they are driven too hard, even for one day, all the animals could die.  Please, my lord, go ahead of your servant.  We will follow slowly, at a pace that is comfortable for the livestock and the children.  I will meet you at Seir” (Genesis 33:13-14).  I believe that the way Jacob took care of his children and animals is a reflection of how God cares for His children and animals as well.  I believe that our God is a kind God who also gives us “stops” along the way when we need them and who loves and cares for all of His creation – including our beloved pets.