Heart on Sleeve and Guitar in Hand

Home » Featured Articles » Heart on Sleeve and Guitar in Hand

Wendy Rush talks to Leigh Cunningham about the band’s journey, and the passion and power of making music.

Leigh was given his first guitar by a youth leader when he was about 14 years old, after commenting that it was something he ‘might be interested in’.  As a teenager he found learning the guitar and writing songs to be a great release for a lot of stuff that was going around in his head.  Over the years he started to compile a collection of his original works, but was always too shy to play them to anyone or, as he says, to ‘put himself out there’.

At 19, Leigh dropped out of a degree course in commerce to travel and think more about the things that were most important to him, and how he could reflect these things in the way he lived his life.  He back-packed across the US and worked at a summer camp just outside New York City where he discovered just how powerful music can be as a tool for communicating with other people.

“Through playing my music to the kids I was working with and the people I travelled with I really gained an appreciation for the way that music can disarm us, open us up and encourage us.  I felt more comfortable playing to people overseas because there was a high likelihood that I would never see them again”, says Leigh.

But it was through these experiences that he gained the confidence to put himself in front of an audience and be himself.  “I learnt that being honest in front of people encouraged them to do the same, and I found a real passion for music and the power it has to influence people in a positive way.”

The Leigh Cunningham Band was formed about 12 years ago and consists of Leigh, Steve Cunningham (bass), Geoff Payne (guitars) and Pete Lucas (drums).  Their first gig was at The Wakefield Hotel in Adelaide.

“I chose the Wakefield because it was across the road from the Fire Station where I work”, said Leigh.

“As a band we wanted to put on a night at the pub that was positive and people focussed.  It was a great night and started us on the journey that we are still on today, using our music to communicate a message of hope to the people we have the privilege of playing to.”

Leigh says it’s been an amazing and unexpected journey.  “When I started out I would never have dreamed that I would have the opportunity to play to the audiences I have, or that I would have recorded two CDs that have found their way into people’s lives all over the world.  Success for me is about being faithful to the gifts and talents I have, making the most of the opportunities that come my way and enjoying the ride wherever it takes me.”

With a family and a full time job as a fire fighter, Leigh admits that the challenge is to get his priorities right and make choices that reflect what he truly values.  He tries to make sure that his commitment to his music and the travel that can go with it is balanced and in perspective to the other things that are important to him.

“I think the music industry can try to tell you that success is about money and fame and that your decisions should be based around those priorities.  It has been a challenge to operate within that industry and still hold strong to a different set of values that puts people and relationships first.”

Leigh says he is inspired most by people that practically demonstrate love and overcome adversity no matter what the cost.  This comes through in the band’s music which can best be described as ‘heart on sleeve rock’.

Leigh says “I want to write music that challenges, inspires and encourages my audience.  I would like to influence people to see life as a gift that is too short to take for granted, and to take a stand for what is important to them.”

How does Leigh approach the writing process?  “I try and find a bit of creative space mentally and physically.  I generally start the song writing with an idea, a message that I think is worth constructing around.  I like my songs to be positive and reflect truth.  I then usually write a chorus that reflects my idea and build a story into the verses around that.  Musically, I play the song on my acoustic guitar to the band and we start the creative process as a band from there.  We contribute ideas, experiment, and see where the song takes us.” 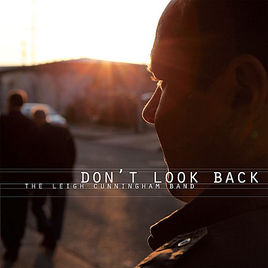 ‘Don’t Look Back’ is available through Koorong

‘Don’t Look Back’, the Band’s latest CD, highlights the things have been important to Leigh and that he has been challenged by on his journey over the last few years.  “It crosses over a whole range of issues relevant to everyday life.  I believe the album makes a statement that taking risks, making positive change, being a person of forgiveness and grace, valuing relationships and choosing sacrifice over self are all life giving attitudes to carry into each day.”

It’s been a long and interesting journey for Leigh.  One that has taken him from a place where he was too shy to play to other people, to performing in front of 20,000 people at Adelaide Oval for the opening of the World Police and Fire Games in 2007.  “I will never forget looking out over the ground under lights as I played ‘I Am Australian’ and thinking what an amazing opportunity this is.”

The Band has featured on Network 10s ‘Cry Bali’ and ‘Around Midnight’, and Leigh has been a regular guest artist on the Nine Network’s ‘Rise and Shine’.

“But”,  Leigh continues “when someone shares with you that one of your songs is significant to them, that is an absolute highlight as well.”

And looking forward?  “Hopefully”, says Leigh “we can continue to write and perform life giving music for as long as we believe it is making a difference.”

Buy the Leigh Cunningham Band’s CDs at Koorong or via online music retailers.