Jesus Ute in Race for Life

In town for the 2013 Clipsal 500, Wendy Rush spoke to Andrew ‘Fishtail’ Fisher about the Jesus branded V8 Ute that’s winning on and off the track.

If you enjoy the sound (and feel) of a V8 engine at full throttle, no doubt you look forward each year to the first weekend in March in Adelaide when the Adelaide 500 (formerly Clipsal 500) again takes over the city.  Racing identity Murray Walker described the Adelaide 500 as ‘the best touring car event in the world’ and in 2018 the race attracted over 273,500 people.

In 2013, for the thirteenth year in a row, the V8 Ute racing series made a return to the Clipsal 500.  At the time, in his 7th year in the series, Andrew ‘Fishtail’ Fisher was again behind the wheel of a V8 Ute emblazoned with ‘Jesus. ‘Passion. Purpose. Life’ ’.  Whether or not he crosses the finish line first Andrew always makes an impression on and off the track.

The Jesus Racing Team is named after the ‘Jesus. All About Life’ media campaign which is about putting the person of Jesus centre stage.  As founder of Jesus Racing, Andrew is passionate when it comes to correcting the misconceptions people have about living life as a Christian.

“I think in a lot of cases people have been turned off religion and church over the years” says Andrew.  “There’s a whole range of issues that the community has walked away from.  So for me, it’s an opportunity to say ‘Hey look…Christians can do all sorts of things in life.  There’s no actual stereotype of a Christian, we’re normal people who just happen to believe in the person of Jesus.’

“We chose the Ute series because in marketing terms it is the most geometrically opposed series to the Christian faith I could find.  It’s the typical bogan, Aussie, Holden vs Ford competition.  We put Jesus in amongst the calendar girls and the beer companies – and the rest is history!”

The Jesus Racing slogan is ‘passion, purpose, life’ and Andrew sees that his purpose is to challenge the paradigms of everyday Australians.

“Most people don’t expect a Christian to race cars at 299 km per hour in what is effectively the most combative and competitive racing series in Australia. We want to make an impact that allows Christians to strike up a conversation with their friends, family, neighbors or colleagues. Motor sport is the third most watched sport in Australia and therefore having a race car with Jesus on it should lead to many conversations.

“We also deliberately place the brand at events such as the Deni Ute Muster. That’s a dusty, dirty weekend at Deniliquin in South Western NSW where 25,000 blue-singlet-wearing Ute lovers gather every year to drink a lot and celebrate the mighty Ute. They never expected to see the name of Jesus there so it makes a huge impact.”

Jesus Racing is in its seventh year and every year it continues to make an enormous impact at racetracks and in the wider community as it takes Jesus to places where you least expect to see him. But make no mistake, the Jesus Ute is not merely a mobile billboard for Christianity – it is a serious competitor in one of the most exciting and competitive racing categories in Australia.  Results for the Jesus Racing Team in 2012 included winning the first race of the season at the Clipsal 500 and finishing the weekend in third place over all, finishing third at Hidden Valley, fifth at Symmons Plains, fifth at the Bathurst 1000 and fourth overall in the 2012 Championship. (See recent results at jesusracing.com.au.)

The Jesus Racing Ute also featured in the Australian version of the Top Gear Live shows in 2009.  Ten performances in Sydney’s ACER Arena reached an estimated live audience of 78,000 people. 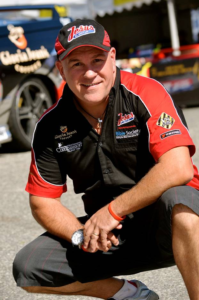 Andrew says “It’s not my job to make people Christians, I just want to challenge them to have a look for themselves.  I think people actually lack integrity if they just simply knock the Christian Faith when they have not really stopped long enough to take a proper look.

“It’s all about standing up for what you believe in and not being afraid to be heard.  I love that, as a racing car driver, I can have a huge influence on the lives of young people, as well as on the lives of the millions of people who see us at the race track or on television every year. Jesus Racing is certainly making an impact!”

The response Andrew and his team receive to the Ute’s branding in and around the racetrack is generally positive.  The success the Jesus Racing Team has had on the track has given them credibility and provided the Team with a level of respect that has helped them to deliver their message effectively.

“People can be pretty taken aback when they see the Jesus Ute for the first time. It certainly turns heads.  Many actually approach us and want to chat or ask questions. It’s a great conversation starter!

“I want to live my faith out in a practical sense. I love motor racing and feel privileged to be able to compete at the level I do, however, I also love Jesus, so to bring my two loves together is very exciting.”

Andrew designed his racing helmet which displays a series of words that are very important to him:  Impact, Forgiveness, Kindness, Joy, Patience, Choice, Love.  “They’re the words and qualities I focus on in my presentations to students and adults alike at the forty high schools and twenty or so men’s, family and community events we address every year.”

One of the projects dear to Andrew’s heart is ‘Life Choices’ – a voluntary program run by the Jesus Racing Team and presented on behalf of Bible Society Australia which engages with around 30,000 young people  each year.

“I want teenagers to know that there are times in where they will be required to make tough decisions and that all of those decisions have consequences. Whilst I am not there to tell them what they should or shouldn’t do I encourage them to take a moment to think through the consequences before they do something stupid. We focus on smoking, drugs, alcohol, teenage sex and road safety, as well as faith, and I talk about my daughter Lily who was born with a serious heart defect and the decisions we have had to make regarding her life and her health.

“There has been an amazing response to what we do with the students, many of them are touched by the story of Lily.  I have even had the privilege of personally stopping one student from taking their life.”

Andrew admits that racing with the name of Jesus on his car comes with a lot of responsibility.

“I’m proud of the fact that we compete at such a high level alongside the V8 supercars and we have come third in a couple of championships.  And nothing beats the feeling you get any time you cross the line first under the checkered flag!”

But the real fulfillment comes from knowing we put the name of Jesus in front of over 1.3 million live spectators every year at racetracks around the country as well as engaging 10’s of thousands of people face to face and challenging their paradigms!

Read more about Andrew ‘Fishtail’ Fisher and the Jesus Racing Team at: jesusracing.com.au.