Out of the Water and Still Making Ripples

Home » Featured Articles » Out of the Water and Still Making Ripples

RISE Magazine spoke to Duncan Armstrong about how faith is shaping his life out of the pool.  Article by Wendy Rush.

How do you start a conversation with a gold medal winning Olympian?  One of an elite group of Australians who have achieved what most of us never will, or never even have dreamed of attempting?   Someone who has reached the dizzy heights of success in their field and the fame and celebrity that goes along with it?  I couldn’t help but ask – what did it feel like?  That moment in 1988 at the Seoul Olympics when Duncan touched the wall and knew that it represented a world record broken, a gold medal ‘in the bag’? 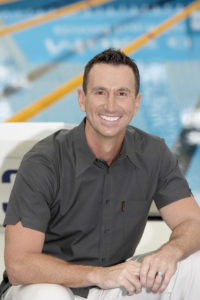 Duncan responded quickly and easily – it was clear it was a moment that he has reflected on many times over the years, and a moment that has, quite understandably, stayed etched into his mind and his heart.

“For me, to touch the wall was a tremendous relief”, he replied.  “But it was also a huge cauldron of emotions.  Along with the relief after all the hard work, there was elation.  But there was also anger and fury.  I showed you all!  I showed the doubters.

“Pride comes later when you have a chance to reflect on your achievement.  But at the time it is quite surreal because it was something I had dreamt about and worked towards for so long.”

At 20 years old, Duncan had spent 7 years swimming fulltime, and 5 of those years really dedicated to his dream of Olympic gold.  It meant a life focused on early morning and late night training sessions, absorbing all his energy and leaving not a lot of energy for other things.  It meant falling asleep at school, not going to parties like others his age.  But Duncan says it didn’t feel like a sacrifice.

“I was travelling overseas, I was one of only 36 Australians chosen to compete.  The group of people at the pool were my friends.  I never felt that I wasn’t where I was supposed to be.  I wanted to be the greatest swimmer in the world and I wanted to be famous.”

But then what?  After the world records, the gold medal, the international acclaim – what then?  When Duncan retired from swimming, how did he start to build a new life out of the pool?

Duncan admits that after the swimming ended he discovered a void.  It is something that is common to top line professionals whose career, through choice or circumstance, comes to a sudden halt.  There is a need to find something to replace it, but you know full well you will be going to the bottom of the ladder and virtually starting over.  It can be terribly confronting.

Duncan questions whether he was fortunate or unfortunate in being able to slip easily into a media role, because the same values that drive competitive sport at an elite level also drive the media industry – ego, fame and fortune.  “I did find that things I thought were important, weren’t actually important.  The values and beliefs I learnt in the pool were not sustainable in life.

“You find that there is an empty hole you can’t fill – no matter how hard you try.  You keep searching for something the world can’t give you.”

In his search, Duncan looked to someone he describes as “a good Christian bloke”.  He saw in him a hidden strength and asked him about it.  Duncan was told that that the source of this strength was Jesus Christ.  “After I stopped laughing, I tried it out and found he was right.”

Duncan says there was not any one thing, but rather a series of events, that led him to Jesus Christ.  The fact that he was able to follow a “good Christian” helped immeasurably.

“People who walk the walk will always have more impact than people who talk the talk.”

How was his decision to follow Christ received by those who knew him, who had spent time in and around the pool with him?  Duncan admits there was a lot of scepticism.  “All my life my attitude had been antagonistic, even toxic.  Behind the facade of success, people can be just as broken as anyone else and that’s where I was at.  Even after becoming a Christian it took me a long time to work through and it was a confronting time for everyone who knew me.   It was a tumultuous time, but I have become a lot friendlier.”

For someone who spent a large part of his life working towards a major goal, what is it that he is aiming to achieve now?

In response, Duncan talks more about balance and behaviours than goals. And he mentions more than once that he wants to read and get to know the Bible more.   “I just want to follow Jesus.  I don’t want to set goals, I want to develop a set of behaviours to display that are around relationship, forgiveness and understanding – in the world this is a very hard thing to do.  I am still learning what it’s all about and still getting into The Book.  I find that if I include Jesus in my decisions things will be pretty right.

“I want to be a great Dad and a great husband.  And if I can do all that, then my life is assured.  I enjoy helping people up to the level to where they want to be at and it is a privilege to work with motivated charities and motivated people, and ultimately playing a part in changing people’s lives.”

He might be out of the pool, but Duncan is far from being a fish out of water.  As he directs his gold-winning energy and zest for life into the lives of others, the ripple effect is evident.

Duncan Armstrong rose to national and international fame at the Seoul Olympics in 1988 when he broke the world record to win the Gold Medal in the 200 metres freestyle.  He formed a winning relationship with coach Laurie Lawrence which spanned 10 years, collecting Gold at the Commonwealth Games, Pan Pacific Championships and numerous national and international competitions.

During his stellar career Duncan also won a host of honours out of the water, including Young Australian of the Year and an Order of Australia Medal.  After representing Australia at two Olympic Games, Duncan retired from the pool in 1993 to pursue a career in media and corporate coaching.

This article was first published in the September 2010 glossy edition of RISE magazine. See back issues here.