Wendy Rush spoke with South Australian producer David Turrell about his movie which is being referred to as the best Christian film since ‘The Passion of the Christ’.

When he read the script for ‘Suing the Devil’ Malcolm McDowell said “this is the best script I have read in 30 years and I want the part of Satan in the film”.

When the movie opened in select cinemas in the USA in 2011 it had the second-highest grossing average of any independent film in the nation.

‘Suing the Devil’ exposes Satan’s greatest lie:  that he doesn’t exist.  It turns the spotlight on the spiritual battles that ordinary people face every day.

The story revolves around Luke O’Brien, a washed-up janitor turned night law student, who decides to sue Satan for $8 trillion dollars. On the last day before Luke files for a default judgment, the judge is about to throw him out of court because she thinks he is a ‘nut case’, when Satan appears and says he wants to defend himself. On Satan’s legal team are ten of the world’s best trial lawyers. The entire world watches on Legal TV to see who will win ‘the Trial of the Century’. 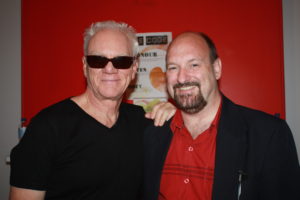 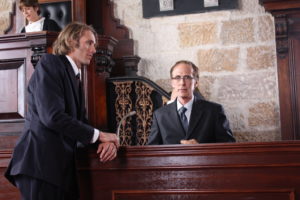 It is the fifth feature film for writer and director Tim Chey.

So how did the former head of a community radio station come to be involved in such a significant project which is already having a huge impact in the US and in Australia?  David explains that he met Tim “by divine appointment” when he visiting Los Angeles as a tourist after attending a National Religious Broadcasters convention in Nashville in March 2009.

“We were having dinner together and Tim said he would love to make a film in Australia.   I spoke to some investors, also through a number of ‘divine appointments’, and raised the budget for the movie”, he said.

By November 2009, just eight months after their dinner conversation, filming had begun.

Tim and David both have a passion to use media to help people come to know and understand who God is and to grow into a relationship with Jesus Christ.  “The main thing I hope for is that people will understand Jesus better and the very real spiritual battle we face every day. It is actually a fun movie with lots of jokes in it as well!

“I also wanted to make the movie because I am trying to encourage other Christian film makers to make Christian films in Australia”, said David.

“I did some research and discovered that this was the first full length Christian feature film produced in Australia in the past 100 years.  Others have been encouraged to have a go and now there are three other feature films being produced.”

‘Suing the Devil’ was filmed mainly in Sydney and the courtroom was the 3C Church in Darlinghurst. The TV news scenes were shot over a couple of days in Los Angeles.  “There was a healthy mixture of Christian and non-Christian actors and crew and over the three weeks of shooting, a number of people made a decision to follow Christ and that was very encouraging.”

The movie’s Facebook fan page now has over 17,000 fans and David says the response has been overwhelmingly positive. At public screenings in South Australia the movie even drew applause from the audience at the end.  There have been a number of reviews published, and David concedes that depending on which side of the fence the reviewer is on will depend on what they say.

In its initial theatre release, ‘Suing the Devil’  was shown in a handful of cinemas.   From February 2012 a major Church roll out was initiated based on the “flick at your bricks” model developed by Heritage media. Group discussion resources, leaders’ manuals and promotional materials were made available to Churches wanting to get involved.

It’s been an interesting journey for the man who never set out to be a movie producer.

“My background is in media, audio and radio – I was General Manager of Life FM for six years and then head of Christian Media Australia. Like many God things, He tricked me into it! There have been many times when God has intervened and made something happen in connection with the movie.  But the flip side of that is that the spiritual warfare on a personal basis has been relentless. I guess you don’t expose the greatest lie that Satan ever told – that he doesn’t exist – without some form of counter attack do you?”

David believes there is a thirst and hunger like at no other time in history for all things spiritual.  He chose to work in Christian media because of the influence media has on people and on our culture, and believes the world would be a much darker place without the positive Christian influence on screens, in papers and on radios.

“When I think about the movie, from both a production and story-telling point of view, I can just see the fingerprints of God all over it. For many people, when they see the movie, God speaks to them in a profound way. I just pray that people will be impacted by the film for many years to come. I am a firm believer that the media influences people and people influence the world.”

‘Suing the Devil’ can be purchased from Koorong and all good DVD stores or online retailers.

The Impact in the US