The power of mentoring: when friendship snowballs into community

Home » Featured Articles » The power of mentoring: when friendship snowballs into community

For many years now the question of what can and should be done for globally displaced people has been asked and largely unanswered.

The causes of displacement are complex. But whose responsibility is it to do something for these people? Is it ours? And what can we do anyway?

No single one of us is ever going to solve the problem.

But we are certainly not powerless.

Georgie Tucker, a young occupational therapist, was inspired by a colleague to volunteer supporting new arrivals through Baptist Care’s Fuse Mentoring Program. Since 2006 the program has matched around 600 refugees and asylum seekers to local volunteers who have befriended them and helped them to settle in Adelaide.

Georgie was matched to Jawel and Kezia, an Afghan couple with limited English. But thanks to their enthusiasm, use of nonverbal cues, and a handy little translator app – they quickly got to know each other!

Soon Jawel and Kezia were cycling over to visit, and they were sharing meals together, visiting local tourist attractions and beaches, practising English and meeting Georgie’s partner and wider family.

Jawel discovered that Georgie’s brother and brother-in- law (both named Sam), were soccer enthusiasts and they all started going to soccer games together. Shortly after this, Georgie’s brother in law Sam and sister Emily also decided to support a newly arrived family. They were matched to an Afghan family who ended up becoming friends with Jawel and Kezia too!

Eager to ‘give back’ to the community, Jawel began doing volunteer work. 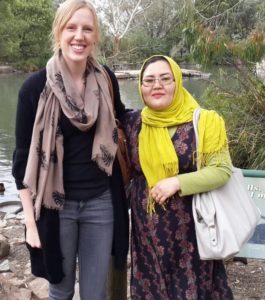 Georgie and Kezia enjoy a day out at Cleland Wildlife Park

“There’s been some real satisfaction seeing Jawel and Kezia becoming busier and beginning to make connections in the community,” says Georgie happily. “It’s been special – not just for me, but for my family and friends. Everyone’s so interested to meet them and hear how they’re going. There’s a lot of goodwill out there.”

Perhaps the icing on the cake for Georgie was when her brother in law’s parents, Liz and Garry, also began mentoring a family through the Fuse program.

“Fuse creates an avenue for people to get involved and meet people from different backgrounds,” explains Georgie.

One of the wonderful things about the program is that strangers with different languages and cultures can be introduced to each other through Fuse, and the result is family BBQs, dinners, soccer matches watched together, friendships, relationships, shared laughter…life.

How should we feel about refugees in Australia? And what should we do about them?

I think that probably the answer is: we get to know them. Fear of those who are different to us is natural. It is also divisive and potentially unhealthy.

“It’s been great meeting someone from a different cultural background – you find common ground and common interests and learn so much from each other. I didn’t know anything about Afghan culture. But Jawel and Rezia were very enthusiastic and positive people and wanted to share – it wasn’t hard to get involved. I always came away feeling very positive about our time together.

But for me, the best part’s been I’ve been able to make some new friends.”

“She’s loving it,” says Georgie. “And I don’t think this is the end of it. I think there’ll be more people getting involved yet,” she adds, with a twinkle in her eye.

This article was first published in the June 2016 glossy edition of RISE magazine. See back issues here.