Luke Drummond’s life took a U-turn as a result of a serious wake-boarding accident. He talks to RISE about how the experience led him to set up a surf school and drop in centre in the heart of Adelaide.

Growing up in a Christian family, Luke Drummond made a decision to follow Jesus Christ at about the age of seven, but by 16 he had stopped going to church altogether.  Like many teenagers who grew up in the church, Luke began looking for something different and he turned his back on God to pursue a lifestyle that was far removed from the life he knew as a ‘Pastor’s kid’. 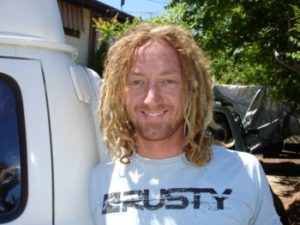 “When I was younger I really enjoyed church and had some great friends there.  As I got older, heading into my teenage years, there were some older teenage guys in the church that I looked up to but I wasn’t really accepted into their group which I believe had a small part to play in me looking elsewhere for that acceptance.”  Luke found that acceptance in a lifestyle that consisted of partying and drinking, and which lasted for about ten years.

Looking back over that period of his life, Luke could see that while he had turned his back on God, God had never left him and, in fact, had allowed certain events to occur while he was on a trip to Thailand with some friends.

During this trip Luke had a severe accident while he was cable wake-boarding and he split his forehead open. He admits he had been partying quite heavily and believes the accident was God’s way of putting a stop to it.  For about a year prior to this, it had started to become apparent to Luke that he had a drinking problem.  He was becoming an alcoholic at the age of only 24.

“God knew the only way to stop me continuing the way I was going was to intervene by putting me flat on my back with a big headache.”

Luke lay in his hotel room that day in January 2007 while his friends were out partying.  He glanced over to the side table and saw a Gideon bible and realised God was trying to get his attention.  “I knew the Lord was trying to get a hold of my heart!” Right then and there he decided to give his life back to God.

When Luke returned to Australia a week later he began looking for a church to attend.  His search led him to Pastor Neil Aitchison and Sanctuary Baptist Church. But while that was a huge step forward, Luke wanted more.  He wanted to find a way to share his faith with others.

Luke was a an avid surfer, so his friend Paul suggested they buy a bus and run free surf trips as a way of reaching out to students and backpackers they were associating with at the time.

So Sanctuary Surfers was born, and within two months they had bought a small Toyota coaster bus, plenty of wetsuits, twelve surf boards and a BBQ ready to start their surf trips.

Luke recalls “the first trip was with a bunch of awesome mates that were in Australia from Norway, studying to be nurses. I think they all passed, somehow studying in between surf trips!”

Word spread quickly that Sanctuary Surfers were the guys to go surfing with, and the trips became so popular that sometimes they needed to take two buses and share the boards.   Originally funded by Luke and Pastor Neil and supplemented with donations, as time went by those who went on the trips also donated because they loved the experience so much.

“God has always provided in one way or another, every step of the way, which has drawn me closer to Him, learning to trust that He will provide no matter how hard or impossible the situation may seem.”

The trips were proving to be such a success, that Luke decided to complete a level one surf coaching course so he could run a credible surf school.  He also opened the surf shop so he could provide boards and wetsuits to people who wanted to become ‘pro surfers’.  The surf shop doubles as a ministry centre with internet access, cafe lounge, mini-cinema and a t-shirt sales and printing outlet.

This all meant, however, that Luke had to quit his full time job as a plumber to enable him to put all his time into running the surf shop and the surf trips. This was not an easy decision to make, because not only did it mean selling his beloved Kombi van, it also saw him turn down a job promotion and huge salary increase.

Sanctuary Surfers officially opened to a packed house in March 2008 and Luke hasn’t looked back.

“Since then we have had heaps of trips and met heaps and heaps of unbelievably awesome people.  We’ve blown up two engines in our original surf bus, acquired a twenty-five seater coach, a dedicated surf 4×4 and surf trailer with thirty surfboards and thirty wetties, plus two other 4×4 Pathfinders – well almost an extra one if you count the full overhaul we’ve had to do on one of them.  Oh and I can’t forget the Mazda ‘Old Faithful’ Bus we had somewhere in the middle there too (we blew the gearbox up in that one)!”

Sanctuary Surfers now has four qualified surf coaches and runs surf, snow and adventure trips to a range of destinations in South Australia, interstate and in New Zealand.

“The journey this far hasn’t been easy, but it has been by far the most exciting part of my journey through life” said Luke.  “I couldn’t have brought this ministry as far as it has come on my own.”   He credits his Saviour, Jesus Christ, with making it all possible and quotes Philippians 4:13:  ‘I can do all things through Christ who strengthens me’.

“And Pastor Neil has been there through every part, doing most of the work to help set up and keep this place running. A massive thanks also has to go out to some very special people who have helped with their financial contributions! They are all amazing! “

Luke originally set up Sanctuary Surfers to share his faith with others. He continues to communicate the gospel message on every surf trip, whether personally, with a Surfing Without Waves gospel pamphlet or running a surf film in transit on the vehicle’s DVD player. The message Luke wants people to understand is that we are all sinners and “fall short of the glory of God” (Romans 3:23) and that because of this sin, or disobedience toward God, we face a penalty of death.

“But God loves us so much He decided to robe himself in human flesh in the form of Jesus Christ who died on the cross, to pay the death penalty that we as sinners owe.”

Luke says “If we believe in this by faith and confess that we’re sinners before God, if we believe that Jesus rose from the dead, we’ll be saved and have eternal life in heaven with Him.”

There have been some who have accepted the message gladly, while others have rejected it.  But Luke reminds us that God wants to give everyone a chance to come to him and waits patiently for those who have not yet made that decision. He quotes 2 Peter 3:9: ‘The Lord is not slack concerning his promise, as some men count slackness; but is longsuffering toward us, not willing that any should perish, but that all should come to repentance.’

Luke says that starting the surf ministry had all the opportunities he had hoped for and much more.

“God has been so amazing throughout it all. I never dreamed or imagined that the surf ministry would lead to the setting up of a ministry centre in Adelaide.”

Another highlight was a trip to Queensland with a team from various Adelaide churches who helped with the flood clean up in 2011.  Luke also travelled to Colorado, USA for an international snowboard ministry conference and spent the 2011 winter season in Mt Hotham laying the foundation for the Mt Hotham church – the highest church in Australia.

“The Lord has blessed me beyond what I deserve and as I seek to fulfil the pastoral calling I believe God has placed on my life, I am now serving at Northside Baptist Church, and helping to run the Bible institute there. I believe the key to the Christian life is a total dependence on and surrender to the Lord Jesus Christ, in all things.”

I am sure Luke would have preferred not to have wiped out so dramatically while wake-boarding on that fateful day in Thailand.  But there is no doubt that as a result, his life has turned around – away from potential destruction and towards a life of purpose and an opportunity to have a positive influence in the lives of others.