Nabi Saleh spoke to RISE Magazine about Gloria Jean’s success and reveals how God is transforming the vision into a reality far greater than he ever imagined.  Article by Wendy Rush.

In 1995 Nabi Saleh had a dream.  The dream was to establish 25 Gloria Jean’s Coffee outlets in Australia within ten years.  Within ten years  more than 400 stores had been opened across the country.  Gloria Jean’s is now in more than 50 nations.  It is one of the largest global specialty coffee operations in the world and the second most recognized brand in Australia.  In 2011 Gloria Jean’s opened a new roasting facility which has doubled the capacity of the roasting plant to meet the Australian and International growth needs of the business. 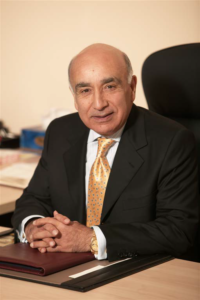 There are two things that you will take away with you after being in the presence of Nabi Saleh for any length of time.  Firstly, there is a sense of the man’s deep humility.  Chairman and Managing Director of Gloria Jean’s International, Nabi is quietly accepting of the company’s global success but insists that he is not responsible for its outstanding achievements.

“It is only by the grace of God that we are here and that we do what we do.  Not in my strength but in God’s strength.”  He gently encourages “keep focused on Jesus and giving glory to him.  He will take you beyond your own ability.  Gloria Jean’s is operating way beyond my own comprehension and way beyond my own abilities.  It is only through, by and in him that I do what I do.  I am just a vessel.”

“All he wants is a heart.  God will always work through the heart.”

Nabi certainly works hard and has experienced his fair share of setbacks and struggles, but he accepts all of these in his stride, firmly believing that the rise and fall (or in this case the rise and rise) of Gloria Jean’s is all God’s work.  This does not mean that Nabi believes in ‘fate’ but rather he goes about his work with confidence and a sense of peace that the one who is ultimately in charge is far greater and more capable than himself.

Secondly, he is insistent that life should be enjoyed, not endured.  He quotes Nehemiah:  the joy of the Lord is your strength.  “Life was not meant to be endured because then there is no joy.  We need to work towards making heaven on earth”, he says.  I wonder what heaven on earth would be like and the idea of experiencing constant joy appeals to me.  But I also note that he’s been able to maintain that sense of joy even when his factory burnt down or when the whole Gloria Jean’s franchise structure was turned upside down.

“Dream and vision is what it’s all about.  How do you know what your gifts are and what your ministry is?  Whatever gives you your greatest joy.  Position yourself in your workplace so that you do what you most enjoy.  God will bring it to fruition in due course.”

But, as many will attest, there can be a huge divide between the dream and the realisation of that dream.

“When you have a dream and you believe that God has put it on your heart, he gets you to recognise the whole dream.  Habakkuk 2:2 says to write it down and that’s where you need to start.    He will give you the outworking of the dream and then he finishes at that point.  Man has to take up the baton from there with a business plan, budgets and cash flow.”

This is the point where many of us come unstuck.  We believe that in possessing the dream we also have to possess all the necessary knowledge and skills to fulfill that dream.  But if we proceed on that basis, warns Nabi, we will fail.

“As John Maxwell says, don’t go working on your weaknesses, go working on your strengths.”   He told me that if my strength is in being a journalist then I shouldn’t try to be an accountant.  I suddenly felt a great burden begin to lift.

Nabi stresses that it is important to get people involved in the business who have strengths in areas that you don’t.  “That’s the kind of partnership you need to build” he says “but be mindful that their involvement should be in fulfilling the dream, not determining what that dream is.”

So in a rapidly growing company, how do you maintain consistent values and work practices?  He stresses that it is who you are rather than what you do.  “You need to be consistent and constant across all areas of your life.  A light to shine in the darkened world.”    He goes on to mention, without a hint of pride, that a number of senior managers have come to Christianity as a result of Nabi living his life as “a light.”

Coincidentally I attended a function in Sydney shortly after our interview where Gloria Jean’s was presented with a NSW export award.  In accepting the award in front of more than 600 people, including the NSW Premier and senior business leaders, Gloria Jean’s export manager said the reason he is with the company and intends to stay with the company is because it has a “core of integrity”.  In my experience there would be very few businesses – Christian or otherwise – that could be described in those terms.  Surely a sign that the Gloria Jean’s light is shining brightly.

The results of Gloria Jean’s commercial success are not only enjoyed by those within the company.  The blessings overflow into the hearts and lives of many people across the world.  Hundreds of young women being cared for through Mercy Ministries and thousands of children in Brazil supported through Compassion Australia are just some of the lives being transformed because one man had faith enough to take on a vision that was too big for him to fulfill.

The reason Nabi does what he does is simple.  He wants to leave a legacy behind – to see God’s work on earth expand.  “At all times” he urges “leave a deposit in the hearts of others.”

Heart.  The extra ingredient that explains why Gloria Jean’s coffee tastes so much better.