Cultivating kids who love to read

Rise editor Wendy Rush talks to Jasmine Berry, creator of a unique initiative that helps parents read to their children.

Dr Seuss knew that learning to read is the first step in expanding our world and realising our life’s potential.   At the very least it is crucial for us to function properly in society but unfortunately it seems there are many people who have been left behind in this regard.  The 2012-2013 Federal Government funded ‘Let’s Read’ initiative highlighted that almost half (46%) of Australians over 15 years of age lack the literacy skills they need to meet the demands of everyday life and work.  ‘Let’s Read’ reported that reading with children aged 0 to 5 years is probably the single most important activity parents can undertake to enhance their child’s future ability to read and write.

In her book Reading Magic, South Australian author Mem Fox says  “… if every parent -and every adult caring for a child – read aloud a minimum of three stories a day to the children in their lives, we could probably wipe out illiteracy in one generation.”

Mem’s idea sounds great, but these days even the most conscientious parent would probably struggle to find opportunities to read three stories a day to their child.  We all seem to be pressed on every side, not least those who have young ones to care for.  And while many children are blessed with loving and involved grandparents, they are not usually available ‘twenty-four-seven’.

But don’t despair, because ‘twenty-four-seven’ help is actually available.  Jasmine Berry, a mother of young children herself, has come up with an idea to supplement – but not replace – reading to your child.

Jasmine was looking for an educational alternative to television for her two little ones and she specifically wanted to find a website where stories were read to children in a natural and simple video format. She hoped to find something similar to the ABC TV show Play School, where stories would be available ‘on demand’.

“My children adore me reading to them but I could literally read to them for an hour and they’d still want more. And you know what it’s like running a household, the chores never end! So I went searching for websites that offered what I was looking for.  Unfortunately I found nothing suitable. The sites I did find were animated, so it felt like the children were watching television again.  They often had American accents and they also had advertisements. So I decided I would make my own!”

At the time this article was written (March 2014), Jasmine had been married for ten years with a four year old son and a six year old daughter.  Jasmine is an occupational therapist by profession with experience working with children, specifically children with autism.  But when she began work on Read to My Child in 2012, she had had no experience with website design, video production, copyright or publishing.

“The first step was finding a web designer.  I was very lucky to have Jamie Druitt, founder and developer of Talklife (an iPhone-based app), as my mentor. He put me in touch with my web designer in Vietnam and we had lots of Skype chats while I explained what I was looking for. Language was a barrier so we typed messages to each other and, while he could see me, I wasn’t allowed to see his face as he is quite shy.”

Despite the challenges of distance and language, the site began to develop and then came the task of locating someone who could record the stories.

“I was lucky enough to know someone at our church, Matt Gray, who produces very high quality video, and he agreed to record for me.  I’ve recorded four times, and one of those sessions was with a different videographer because I was trying to save money. While his price was cheaper, the quality of the recording was poor, so it was a disappointing waste of time and money unfortunately.”

At the time of writing Jasmine has just over thirty stories on the site, all endorsed by publishers, authors and illustrators.  Gaining the required copyright permissions was a very slow process and it seemed to take a long time for the publishers to respond.  She received many refusals. Despite the site being not-for-profit, some publishers were understandably concerned about seeing their valuable intellectual property being made freely available on the internet.

“I’ve been lucky, though, to have been supported by a number of very high quality authors, including Jackie French and Hazel Edwards. (Hazel wrote There’s a Hippopotamus on my Roof Eating Cake and is an Order of Australia recipient). It was interesting waiting for responses – some publishers said ‘yes’ that I didn’t expect, and some who I thought would say ‘yes’, actually said ‘no’.”

Jasmine has also recorded two videos of her singing nursery rhymes, partly for parents to learn the tunes but mainly to entertain small children.

The response from parents has, in the main, been very encouraging.  But as with all of us who step out into the public domain to do something a little different, Jasmine has also been targeted with some negative comments.

“People have posted things like ‘if you don’t have time to read to your children you shouldn’t have them’ but these types of comments I just ignore. They don’t understand that the site is not intended to replace parents reading to their children, which is a precious experience. It is a TV alternative at those busy moments in the day when something just needs to get done, like dinner on the table.

“Despite the odd nasty comment (and I admit I am an overly sensitive type of person), the experience has actually been incredibly rewarding. I had a dream to do something, I persevered, I put in the time, effort and money, and it is now entertaining children all over the world , including the UK, USA, Australia, China, Vietnam and other countries. There are also three Christian stories on the site, which is fabulous. 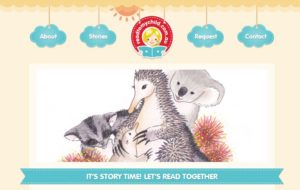 “My hope is that parents who may not read very well, or who may read in monotone – like my husband Scott! – might learn from the site about how to read to their children. For example how to put on voices, change their inflection and volume, when to pause and how to engage with the story. But my main aim is that children will be read to more. The statistics are alarming. I understand that less than fifty percent of kids are read to once a week, and it is crucial for language development, literacy and social development, and it aids with communication between parents and children.”

While Jasmine feels very strongly about the importance of reading to children, she is ultimately driven by her strong Christian beliefs.

“My passion is my faith and trying to live like Jesus did. For me this means continuing to practice being more patient with my children, not losing my temper, showing more kindness and generosity to everyone, giving of my time, skills and money into things that I know would be important to Jesus. Just generally putting love into action and keeping that at the forefront of my mind, irrespective of how I feel on any given day.

“Ultimately I would like Read to My Child to share the gospel through the Christian books I read.  I would like the site to increase the number of books that children have read to them, and to help parents know how to read to their kids.”

Roald Dahl, author of Charlie and the Chocolate Factory, Matilda and numerous other well known children’s stories has been described as “one of the greatest storytellers for children of the 20th century”. He claimed that being read to as a child taught him more about writing than any English lesson he attended.

We don’t know what talent lies untapped in the minds and hearts of our children.  Reading to them is the first step in helping them to engage with language and learning in a fun way, carrying the enjoyment with them as they grow.  And to borrow from Dr Seuss, the more we read to them, the more they will know, and the more places they will be able to go!

Go to Read to My Child at readtomychild.com.au

Jasmine’s Tips for Reading to Your Child:

This article was first published in the March 2014 glossy edition of RISE magazine. See back issues here.