Jesus versus the Bullies

CHRISTIANS CANNOT POSSIBLY HOPE TO CONVINCE WESTERNERS THAT JESUS CHRIST CAME TO SERVE, SUFFER, AND SAVE THEM, IF THEY ARE THOUGHT OF AS BULLYING, GRUMBLING, AND GRASPING FOR CULTURAL GROUND? UNDERSTANDING JESUS’ CLAIM—AND DENIAL—THAT HE WAS THE MESSIAH CHANGES EVERYTHING.

In the first century, worldwide devotion to a Jewish teacher was not what the Jews hoped for when they looked at their ancient prophecies. Many (not all) longed for a military messiah, one who would crush Israel’s enemies by divine force. Evidence of this expectation is found not only in the numerous anti-Roman Jewish movements we know of from the period but also in some of the pious texts composed around the time of Jesus.

Around 50 BC, just a decade or so after Pompey’s Roman armies marched onto Israel’s sacred soil, a Jewish leader in Jerusalem wrote a prayer pleading God to send a particular kind of messiah. In short, he wanted a military commander descended from David who would smash the foreigners to pieces:

“See, O Lord, and raise up for them [the Jewish people] their king, the son of David, to rule over your servant Israel in the time known to you, O God. Undergird him with the strength to destroy the unrighteous rulers [the Romans], to purge Jerusalem from gentiles who trample her to destruction; in wisdom and in righteousness to drive out the sinners from the inheritance; to smash the arrogance of sinners like a potter’s jar. There will be no unrighteousness among them in his days, for all shall be holy, and their king shall be the Lord Messiah. ”

Clearly, the “Lord Messiah” described in this text is different from the figure we find in the pages of the Gospels. This messiah would “smash” the sinners; Jesus offered sinners forgiveness and transformation (as we will see in Chapter 7). This messiah would lead a successful rebellion against the foreign invaders; Jesus said “love your enemies, do good to them” (Luke 6:35). Jesus did not fit any messianic job description we know of from the period, and some of his teachings ran counter to the little we do know about first-century aspirations.

For a brief and reliable account of the concept of “Messiah/Christ” in Jewish expectation, see Joel B. Green, “Christ, Messiah.” Pages 101–07 in Encyclopedia of the Historical Jesus. Edited by Craig A. Evans. London: Routledge, 2008.

In the central passage of Mark’s Gospel, taken up by Luke and Matthew as well, Jesus describes what embracing his version of the messiah will involve. The episode is both a climax and an anti-climax:

“But what about you?” he asked. “Who do you say I am?” Peter answered, “You are the Messiah.” Jesus warned them not to tell anyone about him. He then began to teach them that the Son of Man must suffer many things and be rejected by the elders, the chief priests and the teachers of the law, and that he must be killed and after three days rise again. He spoke plainly about this, and Peter took him aside and began to rebuke him. But when Jesus turned and looked at his disciples, he rebuked Peter. “Get behind me, Satan!” he said. “You do not have in mind the concerns of God, but merely human concerns.”

Then he called the crowd to him along with his disciples and said: “Whoever wants to be my disciple must deny themselves and take up their cross and follow me. For whoever wants to save their life will lose it, but whoever loses their life for me and for the gospel will save it. What good is it for someone to gain the whole world, yet forfeit their soul? Or what can anyone give in exchange for their soul? If anyone is ashamed of me and my words in this adulterous and sinful generation, the Son of Man will be ashamed of them when he comes in his Father’s glory with the holy angels.”

With almost two thousand years of Christianisation, it is difficult for modern readers to appreciate just how shocking this notion of a suffering messiah would have been. We catch a glimpse of it in the response of the chief apostle, Peter, who took his master aside and “rebuked” him. Jesus responds with his own stinging rebuke contrasting human ambitions for the messiah with those of God: “You do not have in mind the concerns of God,” he says to Peter, “but merely human concerns.”

So great is Peter’s misunderstanding of the messiah’s mission that Jesus calls the crowd together in the second paragraph just quoted and makes clear that following him will not involve gaining the world; instead, it means taking up a cross. The contrast here is between two ways of being the people of the messiah. The first tries to protect its interests and “gain the whole world.” In historical context, this is not a reference to materialism but to messianic imperialism—the attempt to dominate the nations. Such a path, says Jesus, will result in the loss of one’s soul before God. The climactic words about being “ashamed of me and my words in this adulterous and sinful generation” in the original setting must have meant that following a crucified messiah in a conquest-culture would bring public shame. Disciples must be willing to bear this.

For the first few hundred years of Christian history, bearing the name of “Christ”—as the word “Christian” entailed—was a risky business. A year or so after Jesus’ death, a leader of the Greek-speaking disciples in Jerusalem, named Stephen, was put to death by stoning (Acts 7:54–60, AD 31/32). In AD 42 the first of the twelve apostles, James son of Zebedee, was likewise martyred, this time by beheading (Acts 12:1–2). After a period of relative calm, the AD 60s saw the killing of James the brother of Jesus (Josephus, Jewish Antiquities 20.200; AD 62), the apostles Peter and Paul (1 Clement 5:1–7; Eusebius, Ecclesiastical History 2.25.5–6; AD 64/65), and scores of unnamed disciples whose dreadful fate under Nero’s reign (AD 54–68) even made the Roman official Tacitus (AD 56–120) wince:

“The confessed members of the sect were arrested; next, on their disclosures, vast numbers were convicted. . . . And derision accompanied their end: they were covered with wild beasts’ skins and torn to death by dogs; or they were fastened on crosses, and, when daylight failed were burned to serve as lamps by night. Nero had offered his Gardens for the spectacle, and gave an exhibition in his Circus, mixing with the crowd in the habit of a charioteer, or mounted on his car. Hence, in spite of a guilt which had earned the most exemplary punishment, there arose a sentiment of pity, due to the impression that they were being sacrificed not for the welfare of the state but to the ferocity of a single man [Nero]. ”

The words of Mark 8:34, “If anyone would come after me, he must deny himself and take up his cross and follow me,” must have had special resonance for the first followers of Jesus. They had watched their “king” suffer and die, and now they were required to walk the same path.

It is tragically ironic that the church of the West has come to be seen by many as an institution that misuses power. This is partly the world’s bias. The church is a big organization, with a long history, out of step with society at some points. It’s an easy target. But Christians don’t help themselves when they speak in public with an air of entitlement, allowing boldness to morph into simple arrogance.

How can Christians possibly hope to convince Westerners that Jesus Christ came to serve, suffer, and save them, if they are thought of as bullying, grumbling, and grasping for cultural ground? Only when the followers of Christ are known for denying themselves and taking up their public “crosses” will they begin to look like the One they claim to represent.

This article is an excerpt from chapter 6 of A Doubter’s Guide to Jesus. Published at johndickson.org, used with permission.

Dr John Dickson (PhD) will be speaking at the LifeWell Conference in Adelaide on 1-2 August 2019. lifewellconference.com.au 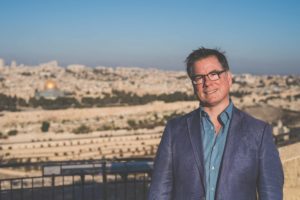 John’s story is eclectic. Starting out as a professional singer-songwriter, he now works as an author, speaker, historian, and media presenter. He was the Founding Director of the Centre for Public Christianity (2007-17). He has published 15 books, two of which became television documentaries, with a third, For the Love of God: How the Church is Better and Worse Than you Ever Imagined, released in Australian cinemas in June 2018. He teaches a course on the Historical Jesus at the University of Sydney, Australia, and researches the origins of Christianity in the Roman empire. He is an Honorary Research Associate at the University of Sydney, and during 2017-19 he is a Visiting Academic in the Faculty of Classics at the University of Oxford. In all that he does, whether in the media or the church, creative or academic, he strives to be a public advocate for the Christian faith in doubting times. Having lost his father in a plane crash at 9, John is sympathetic to the sorrows and questions of our world, and values his wife and three children above all other gifts of this life.