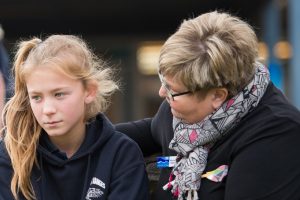 A school Chaplain comforts a student

Tracey Butter was at home with her husband on Wednesday 25 November 2015 when a catastrophic bushfire threatened their property. Now referred to as ‘the Pinery fire’ the bushfire primarily affected the Lower Mid North and west Barossa Valley regions in South Australia. At least 86,000 hectares of scrub and farmland were devastated during the fires which burned from 25 November to 2 December 2015.  91 houses were destroyed or badly damaged and two people tragically lost their lives while another 90 people were hospitalised[1].

Tracey and her husband chose to stay and defend their home. A School Chaplain at Tarlee and Hamley Bridge Primary Schools, Tracey wasn’t able to leave her property until the Friday.

“I went early in the morning to Tarlee Primary to meet with staff. I organised a coffee morning so that I could comfort shocked parents who had arrived with their children, and then I went into class to listen to children speak about their experiences and provide support.”

Hamley Bridge Primary School was closed until Monday. That morning there was severe dust storms, poor visibility, and the ash and soot in the air was very strong. Tracey recalls that parents and children were crying and distressed as they arrived.

“I remember the CFS siren kept going off because burnt trees kept reigniting, fire trucks were kept on the move. I provided comfort and support to children and parents, and reassurance that there was not another fire.

“Returning to a normal school routine for students, staff and families was helpful. Being together we were all able to support and care for each other.

“In the weeks and months that followed the fire, I organised morning and afternoon teas for parents and community members to connect them with services and support from a number of different government and community agencies.”

SMG (Schools Ministry Group) facilitated ‘Stormbirds’ training for Tracey and other Chaplains in the area, to help prepare them to respond to the needs of children and families impacted by the fire. ‘Stormbirds’ is a small group program that allows children to examine how natural disasters have impacted their lives. The program enables them to develop coping, problem solving and other skills as they process and manage the changes they experienced as a result of the disaster.

“During group times with children many spoke of continuing bad dreams, being fearful, sadness for their loss, and their sense of feeling unsafe” says Tracey. “Hand drawn pictures of what they saw before and after the fire were harrowing.

“Parents were very concerned for their children and I urged them to attend public talks by Dr Rob Gordon (Trauma Psychologist) on disaster recovery. Because of the connections I have across the community, I have been able to distribute a variety of donated items to assist families.

“My work is far from over as recent storms and floods have also impacted families in this area. Severe heat and fire danger days have us all on high alert.”

More than a year on from the Pinery fires, Tracey continues to work with and encourage parents and children. “It is such a privilege to share and be a part of the Tarlee and Hamley Bridge Communities as we continue to recover from one of our states worst natural disasters.”

Jessica Jenke’s three children attend Tarlee Primary, where Tracey is the school Chaplain.  Jessica says “We live near Tracey, and immediately after the Pinery fires she came over to check on our family and to see that we were okay, and if there was anything we needed. I know Tracey also checked on a lot of other families within our community. I felt cared for and reassured that we would all get through this together.

“The Pinery fires have affected my three children emotionally. One has nightmares and is often screaming through the night. The oldest was quite distressed that we couldn’t take all our animals with us, and that they could have perished had our house burnt down.

“My two younger children were often drawing our house on fire, and using their toys to re-enact us evacuating our home. I think the constant smell of smoke in the weeks afterwards made them on edge and frightened there would be another fire.”

Jessica recalls that Tracey was often at school in the mornings ready to talk to any children who were upset or anxious. “This was a massive help to my children as they dealt with their emotions and feelings and also feeling safe.

“The Stormbird sessions Tracey ran at the school enabled my children to talk about the feelings they had during and after the fires.  It was a safe place for them to share what they had experienced. It helped them recognise their feelings, physical reactions and behaviour afterwards – and that it is normal to have those feelings. It helped them to understand that change is a natural part of our lives and things get better.

“It taught them how to distract themselves when they were feeling sad/anxious and do something positive that they love doing. It helped them realize that after a natural disaster we move forward and are more prepared if anything was to happen again.”

Jessica says that Tracey has been a huge asset to their community through her role as a Chaplain. She has been able to organise counsellors and guest speakers to visit homes, schools and public venues – to help families connect with services to support them as they deal with the aftermath of the fires.

“Tracey has been a huge support to my family in helping us all cope with what happened. The calming effect she has on my children has helped make them feel safe and provided them with a caring person to talk to. Tracey has helped me understand what my children are feeling and has been able to assist and guide me on how to support them.”

Jessica and her family appreciate Tracey’s ongoing guidance, pastoral care and listening ear as they continue to work through the emotions and scars of the Pinery fire.

SMG has taken the experiences of Tracey Butter and other Chaplains during the Sampson Flat and more recently the Pinery bushfires to develop ‘When Disaster Strikes’ – a program designed to be proactive in its support of children, families and communities with a Chaplaincy Service – when it is needed most.

During the Pinery fires SMG had nine School Chaplains in the affected bushfire zone, as well as access to more than twenty others in surrounding areas to provide emergency support. A year later those Chaplains continue to provide pastoral and practical support to children and families in their local communities.

Rev Dr Lynn Arnold AO, SMG Chairperson, launched the ‘When Disaster Strikes’ program in February 2017. He said: “Our state has suffered recently with floods, storms and bushfires where lives were lost, homes destroyed, families overwhelmed and communities reeling in the aftermath of those devastating events.

“Natural disasters and crises such as major accidents, death, and suicide are usually unexpected and can be overwhelming. Most people who experience a disaster or crisis may not show outward visible signs of injury, however, inwardly there is an emotional toll. Emergency and one off mental health services come and go at the time of a disaster or crisis. However, it is a Chaplain who provides consistent pastoral care and practical support at the time of the disaster, immediately afterwards, and in the weeks, months and years following.”

SMG have been serving and supporting communities in South Australia for over 25 years and are well placed across the state with Chaplains in 342 schools in metropolitan, regional and remote areas. ‘When Disaster Strikes’ aims to mobilise local Chaplains in their own communities to provide help and support when a disaster or crisis occurs and in the period following. This support is vital particularly in regional areas where other services may not be in place or easily accessible.

“School Chaplains already have local community connections and have earned the trust of local people with their pastoral and practical support. Because of these established relationships, connections and investment they are in a good position to contribute to disaster resilient communities.

“SMG seeks to be a leader in achieving key actions as outlined in the National Strategy for Disaster Resilience and the SA Emergency Services Strategic Plan, and to lead change in order to drive and find improvements in disaster recover. Both of these strategic plans highlight the need for government, business, services, and the community to work collaboratively to achieve the best possible outcomes in response, resilience and functioning after a disaster.”

SMG Ambassador Brenton Ragless has seen firsthand the devastation and loss bushfires can cause through his involvement with the CFS.  He also experienced the care of a School Chaplain during his formative years which had a positive impact on his life.  He says “I want others to have access to and experience this type of pastoral care and practical support especially when they are in crisis. It is my hope that we don’t see another major bushfire in this state for a long time. However, through the ‘When Disaster Strikes’ initiative we will be better prepared to respond immediately when the need arises.”

Beyond Bank Australia, Paradise Motors Mazda and members of the public are partnering with the When Disaster Strikes program. More funds are still needed.  Tax deductible donations can be made through the SMG office or online at: smg.asn.au/whendisasterstrikes